This last Saturday we had a super special delivery! The cow stork brought us a set of twin heifer calves. Thanks to the technology of Ultrasound and our veterinarian we knew ahead of time that this cow would be having twins and that they would both be heifers. Just like in humans twin births add a degree of risk to a pregnancy and extra care. On Friday night the cow in question started to show signs of calving right around milking time. I pulled on the long glove and checked her cervix dilation to see how close she was to pushing. At the time she was only dilated slightly so I let her rest in our big maternity pen and came back to check on her before bed. At 11 PM she was restless but still not ready to calve. I went home and set my alarm for 3 AM. At 3 AM there was still nothing, but I checked her dilation again and the position of the calves to make sure there wasn’t a hold up from the calf end of things. She still wasn’t ready at 3 AM so I went home to bed for a few more hours of sleep.

Fast forward to the next day at about 4 PM (or later the same day, I guess). A quick check on her before I headed home for a little bit showed that she was in active labor. It was time for these calves to be born! When a calf is born it should be born with it’s front feet and head first, like this. 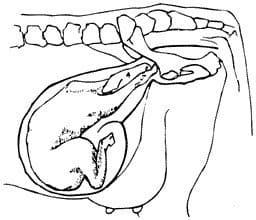 A calf with one or both legs back, it’s head down between it’s front legs, coming back legs first or butt first is going to have a difficult if not impossible time making it out of the cow. With a set of twin calves you have 2 heads and 8 legs to have all tangled up when it comes time for the calves to make their entrance into the world. Chances of a cow having two live calves on her own without complications aren’t great so farmers watch the cows closely and step in to help the cows and calves out. 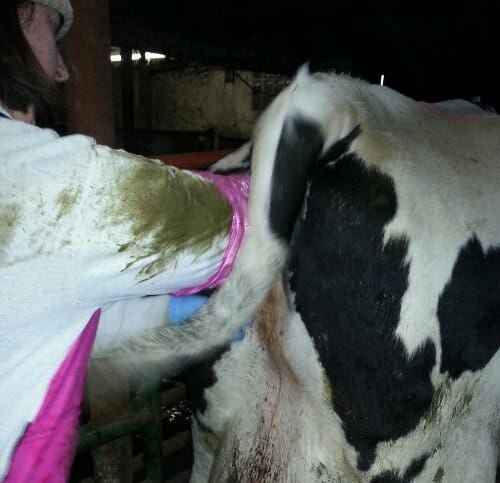 When I reached in and checked the position of the first calf, sure enough, I found a set of back legs where front legs and a head should have been. Thankfully I was able to secure obstetric chains around each leg and working with the cow’s contractions we were able to pull out a live heifer calf! As soon as the first calf was settled into the straw  I checked the position of the second calf, again a pair of back legs greeted me. Again I was able to get the obstetric chains onto the second calves legs and pull out another live heifer calf! 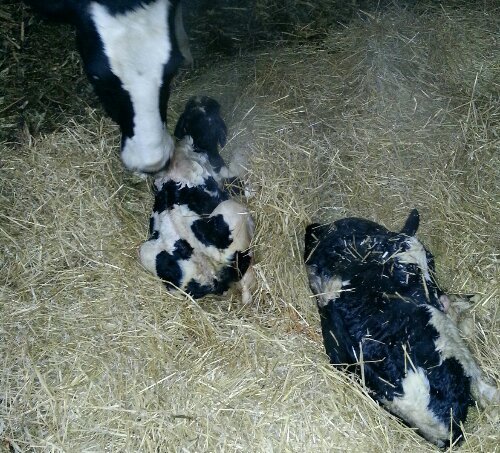 Thankfully this cow is an older cow and is a very big girl. She and the babies are doing well. If you’re interested in checking out what happens to dairy calves after they are born click HERE for my post on baby calves.

While we are glad that these two heifers are here and are healthy we would much prefer that our cows never have twins. Twins can be hard on our cows and the complications after delivery can really set a cow back. Our new mama got some antibiotics to help her ward off infection and some additional vitamins to help her recover. In cows and in humans twining runs in families. Cows that were twins tend to have twins as well. When a cow has twin heifers it’s the best situation, heifer calves are usually smaller than bulls and the smaller the calf the easier it is on the cow. Also when a cow gives birth to a bull and a heifer calf about 90% of the time the heifer calf will be missing parts of her reproductive track and will never become pregnant which means she will never be a milk cow. A heifer born twin to a bull that is in the that 90% is called a Free Martin. The bull calf in a mixed set of twins or born twin to a bull will be normal. You can learn more about twin dairy caves in THIS POST.

So our two new heifer calves are all settled into their calf hutches and are nice and warm with their calf blankets on but they still don’t have names! So, dear reader, I turn to you. What would you name these two sisters? Their mother’s name is Tastee so their names have to start with a T. They are sired by a bull named Coldspring. 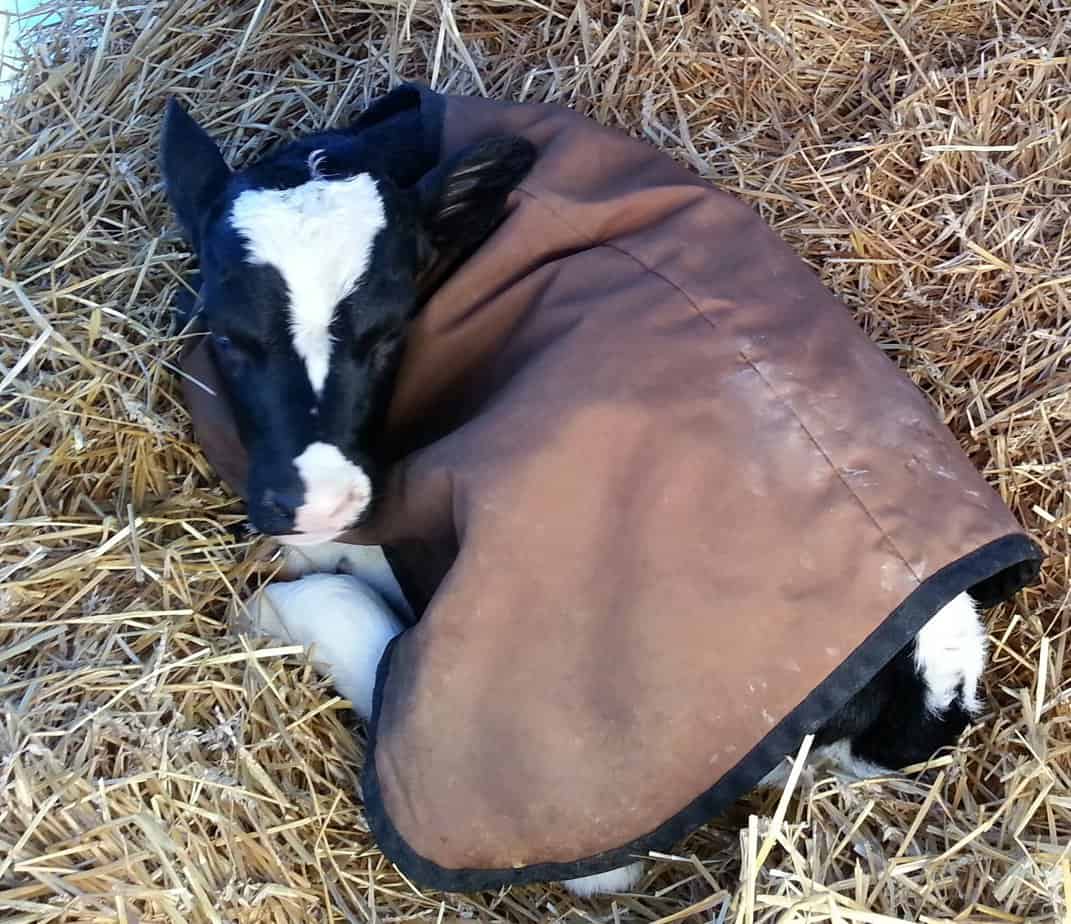 This is the first calf that was born. She needs a name! 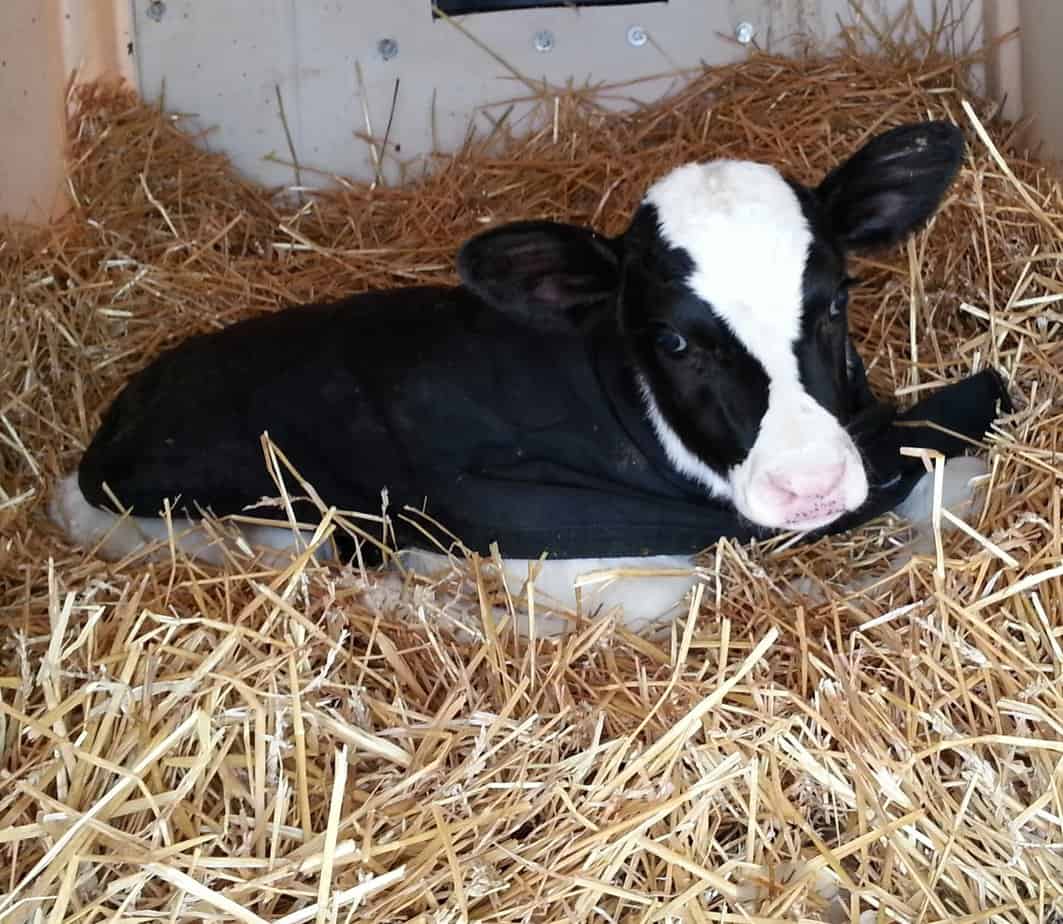 This girl was born second. She needs a name!