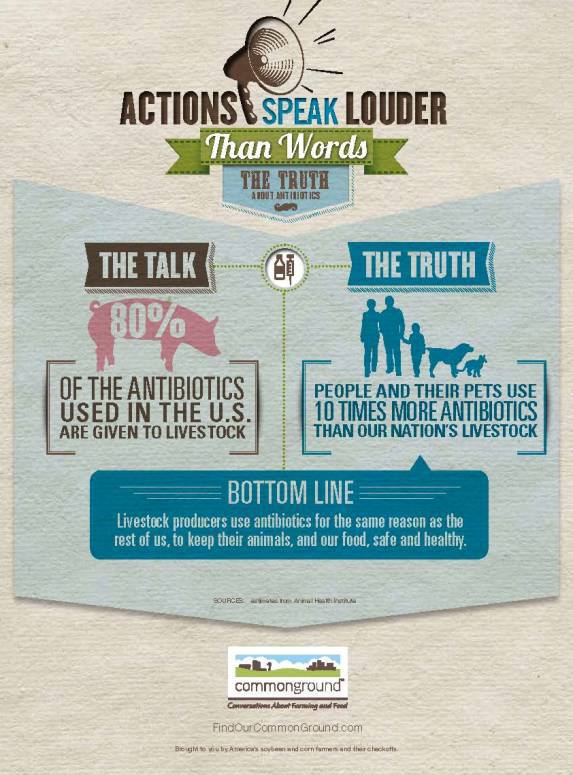 Michael wanted to stress to me that their EZChicken campaign wasn’t meant to offend farmers in any way. He went on to say that they really value the farmers and ranchers in our country. And I stressed that I am supportive of all production practices and I am very much not against them choosing to use chicken that was raised without antibiotics. The problem is the ad campaign that uses fear to sell sandwiches.

Michael believes very much that Panera’s chicken is better. What I got from our conversation is that while he personally doesn’t understand all of the facts behind animal ag production, he has seen lots of information that supports Panera’s viewpoint. I’m sure he has, just like the rest of us. The information out there about our food can be overwhelming and difficult to weed out truth from hype. He also repeated several times that the road was hard because as he put it “our chicken is more expensive”.

Here’s the thing, several years ago many of the major chicken produces came together and pledged to not use non-therapeutic or prophylactic antibiotics. While Panera has built an offensive marketing campaign touting their chicken as something special, many other restaurants have been using the same chicken, with lower prices and no fanfare.

A quick list of chain restaurants that haven’t offended farmers and ranchers, although they also use poultry that hasn’t been given antibiotics…

Props to those companies for not using a label to scare people into buying their food.

Michael has said that Panera is going to take down all the images and references to EZChicken. When I asked about the rest of the campaign, like the pill barn image that implies that antibiotics are in our food, Michael told me that in his opinion the fact is correct but he will take a look at the wording. 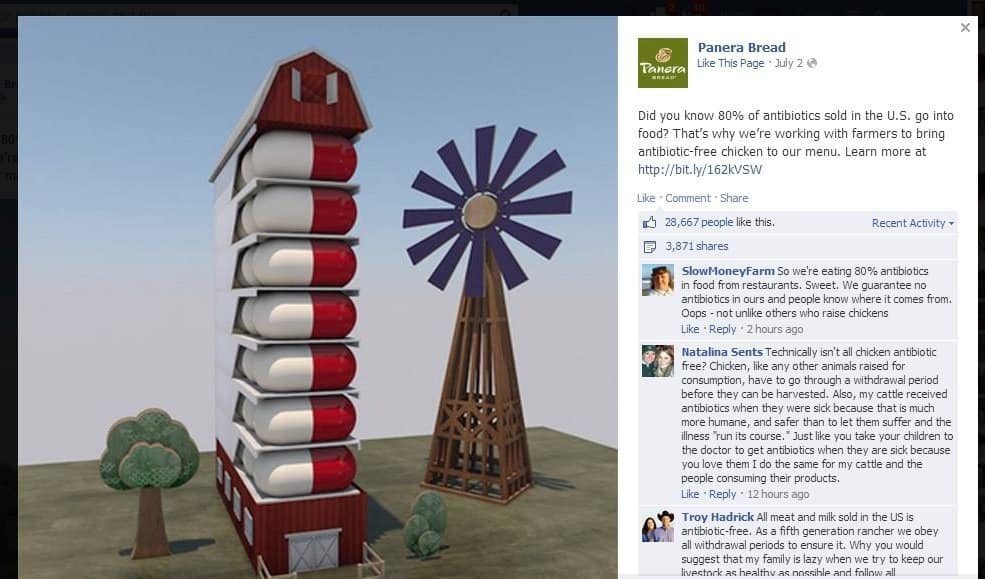 I asked about the video (not linking to it because I’m not going to help it get more views) that says “Lots of places serve chicken with antibiotics and we could take that easy road and do things the way others do, but we’re always trying to make food that’s more delicious… and while there were a lot of reasons  behind our decision we think antibiotic free chicken simply tastes better, more tender, more like…well, real chicken.” His response was, he felt it was true. I don’t know the last time I walked into a restaurant and had a chicken sandwich with a sprinkle of penicillin on top, like the video says. And if antibiotic free chicken tastes better or more like real chicken, I’ll be sure to order myself some chicken tenders at Culver’s or any of the other thousands of places I can order chicken raised the same way. This isn’t a case of semantics or a poor choice of words in my opinion, this is deliberately using fear to sell sandwiches. That’s not OK.

I asked about a public apology to farmers, I was told that they would post something on facebook that “clarified their viewpoint”.

Here’s where I am at with all of this. I think that Panera realized that they have a lot of ticked off people on their hands. In fact I was told by Michael that our response to this ad was the loudest response they have ever had. Good job folks! The problem is that even after my conversation with Michael the company doesn’t seem to understand that the problem isn’t them using chicken raised without the use of antibiotics, the problem is using a marketing campaign that uses fear to sell sandwiches. Taking down a few images that infer that farmers are lazy, doesn’t fix that. A company that uses fear in their marketing is a company that doesn’t want my business… I don’t care how expensive their chicken is.

Just like it says in the image at the top of this post, actions speak louder than words. When I said it was time to #PluckEZChicken I didn’t just mean to ax the bird. I want to see this kind of fear driven marketing stopped dead, starting with Panera.

Join me in telling Panera Bread Company that this is not ok. Tweet and Facebook with the hashtag #PluckEZChicken, tell Panera what you think.