On Thursday a new undercover video showing abuse of dairy calves in Colorado was released by  the animal rights group, Compassion Over Killing. The video shows calves being handled roughly, it shows dead calves and it shows footage that makes my heart hurt. The video was shot in an area of Colorado that is still dealing with the aftermath of the extreme flooding that hit the state this summer, it’s an area that is filled with farms and agriculture and it’s home to a good friend of mine who dairy farms with her husband. When I saw the video the very first person I called was Ashley.

I met Ashley this last winter in Albuquerque, New Mexico. We were both there as participants in the Holstein Foundation’s Young Dairy Leadership Institute (YDLI).  Ashley is a hilarious woman who stands out in crowd and she and I became fast friends that week. She and I share a similar path into the dairy industry.  Our love for horses was our introduction into agriculture and we both met dairy men and married them. Ashley is quick to call herself a “mail order bride” she and her husband met on farmersonly.com and she moved from thoroughbred horses in Virginia to dairy cows in Colorado. She and her husband Steve and their 3 kids, Campbell 10, Andrew 4 and Blake 5 months are very much a family farm even though they have 5 times the number of cows that we have on our farm.

I asked Ashley to share her thoughts on the video and what it feels like to have this kind of thing happen in your back yard. She sent me the following and I wanted to share her response with all of you.
************* 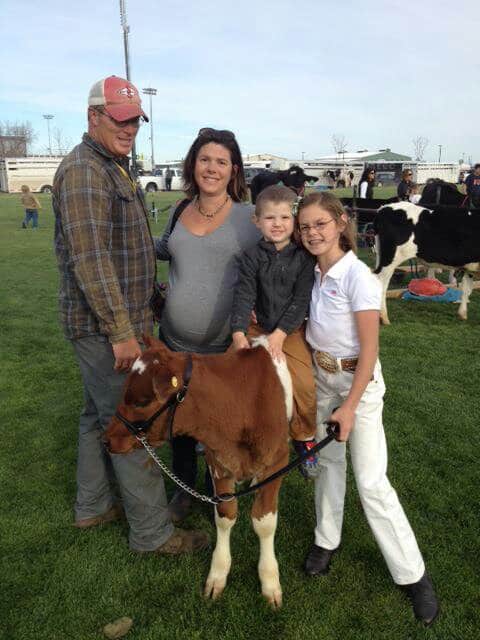 Our milk co-op contacted my husband Steve around 2 in the afternoon to let us know a video showing animal abuse had surfaced. We thought we would have to explain to a few friends on Facebook how the images they saw were rare instances and didn’t happen on our farm, and our friends’ farms. Then we learned it happened in our community.  On a calf raising facility that we often drive past. That made it even more personal.  This wasn’t an incident in a state on the other side of the country. This was in our town.  A town with a long, rich history of agriculture and a small, close-knit population.  People weren’t going to differentiate between an operation raising calves for the beef industry and local dairy farms.

I drove past the farm in question on my way to pick up our 10-year-old daughter at school. I was on the phone with our milk check off program, Western Dairy Association. They asked if Steve and I would be up for an interview on the news because we in the industry knew that whatever was on the video wasn’t standard practice, but we needed our consumers, the general public, to understand that as horrible as the video might be, those of us that spend our days caring for animals are even more sickened by it than words can describe.

My first thought was “can we do an interview and help people understand this isn’t normal?”  Well, actually my first thought was really “I need to run home and put on pants before I go on tv”.   I happened to be in yoga pants and flip-flops.  But I was really worried that we wouldn’t be taken seriously. That people wouldn’t believe that we don’t condone abuse towards animals. That we really care about them.  I needed people to see our reality. 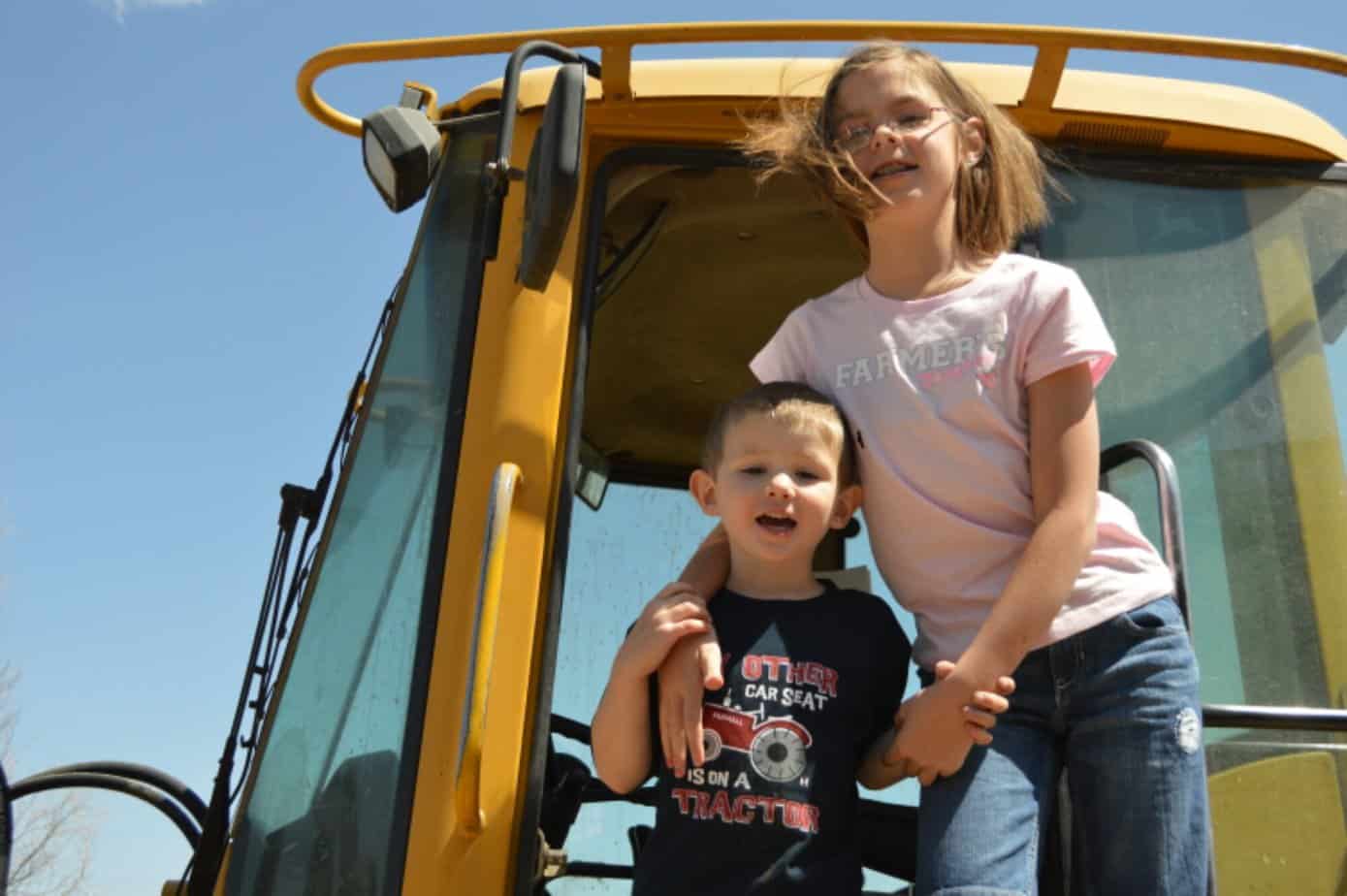 Our reality is that like 99% of the dairies in Colorado, we are family owned and operated.  My husband started his dairy almost 13 years ago. He worked 2 jobs to save money to buy cows and lease a facility.  Then he milked his cows and worked another job to keep improving and expanding.  I spent 4 years feeding calves twice a day seven days a week until the demands of the dairy and the demands of our growing family couldn’t be balanced.   Our son was 5 days old the first time I strapped him into a Baby Bjorn and fed 40 calves twice a day.  Our youngest daughter was 9 days old the first time she had to feed calves with me. Our oldest daughter has more driving experience at 10 years old than many adults because she has been driving the calf feeding truck since she was 7.

Our reality is that like a lot of farm children, ours spend a lot of time with us while we are working.  They see everything we do.  As dairy producers, we not only have to answer to our consumers, we have to answer to our children.  I have to answer to my children.  We need to be able to look them in the eye when they ask a question and give them an honest answer and keep their respect.  We all know how honest children are.  If you screw up, they will out you. By working with their parents, farm children learn to respect animals.  They learn from a young age how to feed and care for animals. They learn how important it is that they be well fed. That they have fresh water at all times. That in the winter they have a warm bed. 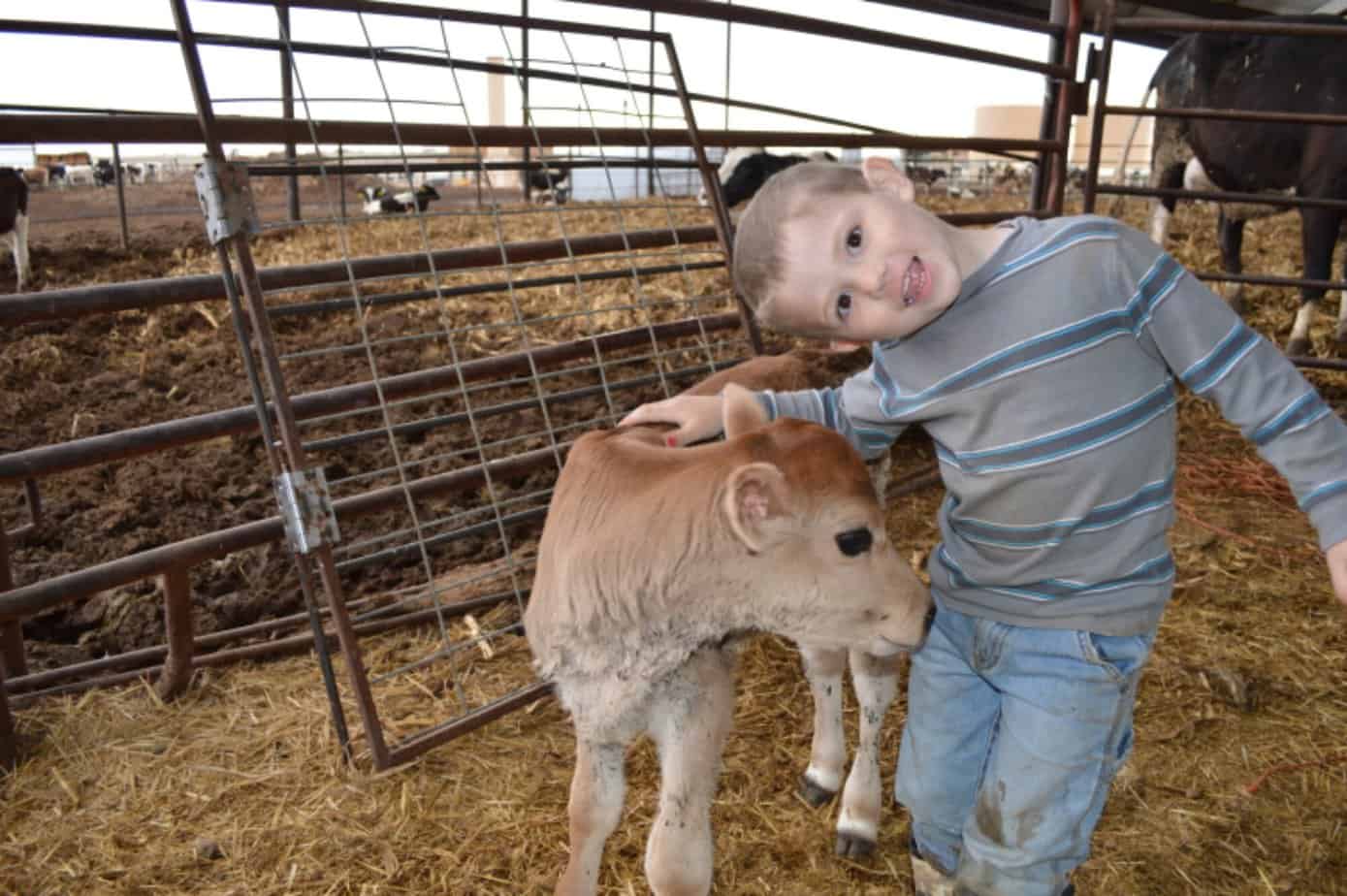 Our reality is that dairy is our life. Our animals buy our groceries, and Christmas presents and pay for braces and check-ups for our children.  We take care of our animals because it is the right thing to do. We have an obligation to them. And the better we are to them, the better they produce for us, so we can keep making improvements on the dairy, to keep making their lives more comfortable.

The day the video broke, I had to stand outside our dairy and while being filmed, watch a video showing a couple of really bad human beings doing a really bad job of handling calves.  I was sick. I was disgusted and I was mad.  I don’t understand the mentality of picking on things smaller or weaker than you. And I’m okay with that. I don’t want to understand why those workers thought it was okay to pull calves by their ears, or by their tails.  What I’m not okay with is the person doing the filming not standing up and stopping the abuse right there. Because any dairy farmer would have done that. We love our animals. We respect our animals, and we don’t allow abuse to continue just to get good footage.

On our dairy we have SOPs to cover everything. From a cow that may have trouble standing up because she isn’t feeling well, to a calf that is getting sick. We also have a hard and fast rule that you are not allowed to hit an animal. With anything. EVER. It is a firing offense, no warning given. We have video cameras placed in our parlor, our holding pen and elsewhere on our dairy so that if we do have an employee doing something wrong, we can address it immediately.  We have had new employees quit because they weren’t allowed to so much as yell at the cows.  Stressed cows don’t give as much milk. We pay our bills by selling milk. You can see how less milk might be a problem.  Like many farmers, we have hundreds of thousands of dollars invested in our cows.  There is no way that we would abuse, or allow any abuse by employees, of valuable animals.

As a mom, and a dairy farmer, I wish every child in the world received the same care as the average US dairy cow. Our cows have the benefit of a nutritionist creating their diet. They have that carefully concocted ration in front of them 24 hours a day. They have fresh, clean water 24 hours a day. They have fluffy sand beds.  They have exercise corrals where they can soak up the Colorado sunshine. We have herd health checks every two weeks that involve our vet coming and checking for pregnancy in some cows, looking over our herd and helping us keep up our protocol with vaccinations etc. Our cows receive regular hoof care. There are over a dozen people that we employ or contract to keep our cows healthy and in excellent physical condition. Wouldn’t it be nice if every child had the same interest taken in them?

Each time a video of abuse comes out dairy farmers like me and my family and Ashley and her family are left trying to defend our livelihoods  Instead of the general population seeing abuse as the sick exception to the quality care we give our animals, we are thrown under the bus along with the abusers. I often wonder why people understand that the vast majority of parents don’t abuse their kids despite the horrible stories of abuse on the news, but they are so quick to judge farmers as all the same when a rare video comes to the news.

The bottom line is this. No one abhors animal abuse more than farmers. We see the same videos you do and we hate it. Please don’t let these groups manipulate your feelings with their videos and propaganda.

Previous Post: « One more way we are keeping your food safe.
Next Post: Sometimes things get a little twisted. »