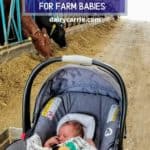 I never thought I would write a list of favorite farm baby gifts, but here I am. I am starting this post off with two disclaimers. First, I am only 15 months in to this whole mom thing and with only one kid. I AM NOT AN EXPERT. 2020 Update. I am now 4.5 years and another kid into this mom thing and I am still not an expert but I still back everything on this list. However, I have figured out a few things that worked well for us and a couple things that at best were a waste of money and at worst were total fails. Second, some (but not all) of these links are affiliate links. This means that if you click on them and buy the product, I get a small cut of the sale. I won’t get rich from this post but I might be able to buy some more diapers!

You can also check out my Amazon Store. I have more farm baby gifts and a section with favorites for everyone in our house. Combine and of these ideas with a freezer ready pan of potato gratin and you will be a hero to your new mom friends.

These bibs are supposedly made of muslin but I am pretty sure they are actually made of magic. Again, when I first had Silas I had no clue that bibs could be bad or good. Thankfully another dairy gal clued me into these bibs. So what makes them so great? First of all they aren’t just a bib, they do double duty as a burp rag. They are larger than a standard bib which is great because it seems a baby that spits up always manages to get the spit up outside of the area a standard bib covers. But the true magic is that these things can soak up a lot of … whatever needs to be soaked up. They also dry really quickly which is a quality I’ve come to appreciate in bibs. Last but not least, they come clean really easy.

You can order on Amazon HERE.

When Hubs (yes, he came along) and I went to Babies ‘R Us to register for all the things a baby is supposed to need, we were completely overwhelmed. A massive store full of a million things a baby might need with multiple brands of each thing will do that to a person, I guess. But one thing I knew I wanted before I went in was a Bumbo seat.

I didn’t actually know why I wanted one but I had seen photos of all of my friend’s kids sitting in them, so I figured they were something good to have. What I didn’t know before I walked into the overwhelming baby store is that they have a version that comes with a tray that attaches to it. That’s the version I went with and I am glad I did.

The Bumbo seat is much more portable than a high chair and the tray is a nice thing to have when say your highchair cover is soaking wet after having to scrub spaghetti sauce out of it. The folks at Bumbo were pretty genius when they designed the tray to be stored on the back of the seat, which is super handy. However, I became a true Bumbo believer when Hubs had a little incident with the tray that resulted in melted plastic. I sent an email to the company telling them the story of Hub’s poor decision skills that involved a microwave and asked if it was possible to just buy a replacement tray. I’m not sure if it was because they felt sorry for me or what, but they sent me a replacement tray on the house. That was unexpected and also awesome customer service.

You can buy one on Amazon HERE.

This might be the cutest of the farm baby gifts I am sharing!

Babies like to play with things with their little fingers. This is not breaking news. However, sometime between the time I was little and now, some brilliant person figured out that sewing little loops of ribbon into the seams of stuffed animals or around the edges of blankets was what made babies really happy. While I had a deprived childhood, Silas has not. He no longer has to lay in his crib searching in vain for something to occupy his pudgy, restless fingers as he drifts off to sleep because he has “Cow Cow”.  What he lacks in original naming ability, he makes up for in cuteness folks.

2020 Update- Cow Cow is still Silas’ favorite and has held up remarkably well!

You can get your own Cow Cow HERE.

“Do you want to go check on Wubba?” is code in our house for “Kid, I love you but if you don’t go take a nap Mama’s going to lose her mind.”.

When Silas was just a few weeks old I posted a plea on Facebook asking for tips on how to keep the pacifier in the baby. At the time of posting I had been in a vicious cycle of Silas drifting off to sleep with a paci only to have him relax enough after a few minutes of sleep that he would drop the paci and wake up angry. This meant I only got to sleep for as long as the paci would stay in place. That’s a dark place to be you guys. Several people commented on my post that I should try out a Wubbanub. I did and it worked! Plus they come in tons of different animal options so that’s cool. From personal experience I highly suggest buying two of the same critter right off the bat and rotating them. This way when one goes missing you have a backup and it won’t rejected as an imposter. Nobody wants an impostor Wubba.

They have a few farm critters available.

You can order the longhorn steer version we have HERE.

The farm dog that doesn’t smell like a farm dog unless you forget to wash it version HERE.

The barn cat that promises to not have kittens version HERE.

Ok so this isn’t exactly a farm baby gift, but pregnant farm moms need things too.

These maternity leggings are super comfy and super stretchy and they come in several colors. Unlike every other item of clothing that has the maternity label on it, they don’t cost a million dollars, only $17. Click HERE.

After you have had the baby, leggings are still good, especially if you’ve had a c-section. I recently discovered a brand of leggings that are just as buttery soft and comfortable as LuLaRoe leggings but they only cost $12 and they have them in a ton of prints! I now have a couple of pairs and they seem to be standing up just fine to being washed and worn.

Check out the O/S options HERE.

Check out the Plus Size options HERE.

This little deal is something I used a ton and still use now that I have a toddler. If you’re the type of person who wants to make some of your own baby food, you should definitely pick this up. Even once your kid is beyond baby food, this is awesome for stuff like apple sauce or squash. Basically this little contraption puts purees into packs that you can then toss in the freezer. Of course you can skip the packs all together and freeze stuff in ice cube trays but the thing about the packs is that they are super portable and Silas figured out how to suck the good stuff out pretty quick, making them awesome for on the go feeding. The packs are not reusable but aren’t horribly expensive either.

Now i’ll be honest, this thing is kind of rinky dink and will  infuriate you at times. Whatever you do, don’t try to force a too thick pea puree into the packs or you WILL end up cleaning peas off the ceiling. But for $16, you can’t expect it to do all the work, right?

(Note, get the plain packs rather than the animal ones. Both options come with 50 bags but the animal ones only come with 25 caps and the plain ones come with 50 caps. The caps are reusable but if you’re planning on doing big batches of foods, you’re going to want enough caps for all the bags. I think they are phasing out the plain style so you might want to stock up now!)

This is the favorite book in our house. And what I mean by favorite book in the house is that it’s my favorite book to read. To be completely honest Silas prefers Dear Zoo, but that book teaches him that you can mail order zoo animals and honestly, I bring home enough random critters for this house, so I probably shouldn’t encourage that behavior. Plus, I’m sick of reading it so I hid it for a while. The moral of Little Blue Truck is don’t be a jerk to people and then expect them to help you out. It’s a lesson I think a lot more people should learn.

You can get a copy HERE.

Farm mom’s have some special needs that most mom’s don’t have which is why I made this farm baby gifts list. If you’re a dairy farmer (or other type of livestock that produces a smell other people find offensive) I highly suggest picking up a used infant car seat that you can use in the barn. Silas spent many milkings literally hanging out in our parlor while we milked. Hanging out as in, a chain from the ceiling with a clip that went around the handle for the infant seat. It made an awesome baby swing. Of course MAKE SURE YOU STRAP THE KID INTO THE SEAT. (No, Silas isn’t strapped in in the photo above but only because I had set him in the seat to take this picture and was standing right there with him.)

I also recommend finding a used jogging type stroller. A regular stroller does not cope with mud very well and it doesn’t make sense to spend hundreds of dollars on a stroller that is just going to get filthy.

If you see a used Pack n Play for sale for cheap, buy it. We have 3 of them. One in our house, one in the barn and one in Grandma and Grandpa’s house at the farm. While Pack n Plays are designed to be portable, you do not want to take the one from the house out to the barn and then back again.

Not all farm baby gifts work they way you would like them too. Here are a few gifts I would skip buying.