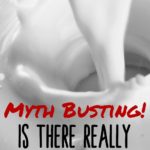 So recently I have received messages from several people about some very wrong information that is floating around the internet. Of course I feel the need to get the correct information out there. As you can guess by my blog post, it has to do with the idea that there is pus in milk.

Just like the idea that chocolate milk is made out of bloody milk, this one is way wrong.

So let’s look at some basic science here. What is a “pus cell”? Pus is made up of dead white blood cells, bacteria and dead skin cells. Gross right? That’s what the anti milk people want you to think about when they spout their bologna. So, there really isn’t a single “pus cell” like this charming infographic would like you to believe, instead pus is a combination of things.

Dairy farmers are paid more money for milk that has a low SCC, if our cell count raises above normal levels they will dock the amount we get paid for our milk, if it raises even higher they stop taking our milk and we can’t sell it. So not only do we not want our cows to be sick, it would cost us a lot of money and could cost us our farms if we were to ignore a high SCC. While the current US regulation is that milk must have a cell count under 750, dairy coops and companies generally require under 400 and most dairy farms aim for a SCC under 200. in 2018 the average SCC across the US was 178.

So does this mean that we are allowing some pus in milk? No.

Everything we eat is made up of cells.

So the anti milk folks want to you to think there is pus in milk so you will be grossed out, but think about this… A steak has white blood cells in it, because it has blood and white blood cells are a part of that. The anti milk people aren’t going around saying that your steak has pus in it because we can see with our own eyes that it doesn’t. However, since we can’t see into our milk like we can see a steak, anti milk activists use bad science to scare you into believing their view point and that’s just not right!

Instead of using facts to persuade people to not drink milk they are literally trying to make you terrified to eat or drink anything beyond what they feel you should be eating and drinking. It’s time to take back our food from the activists and let them know that it is not ok to use false information to slander a food they don’t agree with. My cows are mad and so am I!

What about casein in milk?

As far as the casein goes in the photo above, a human’s breast milk’s protein is 20-45% casein. If it’s so toxic I think there would be a lot less people in this world because we wouldn’t have survived infancy with all that toxic milk around.

Help me spread the word. Share this post with your friends and let’s get this lie exposed for what it is, bad science used by people with an agenda.

Previous Post: « Is There Aspartame in Milk?
Next Post: Are humans the only animals that drinks milk from other species? »