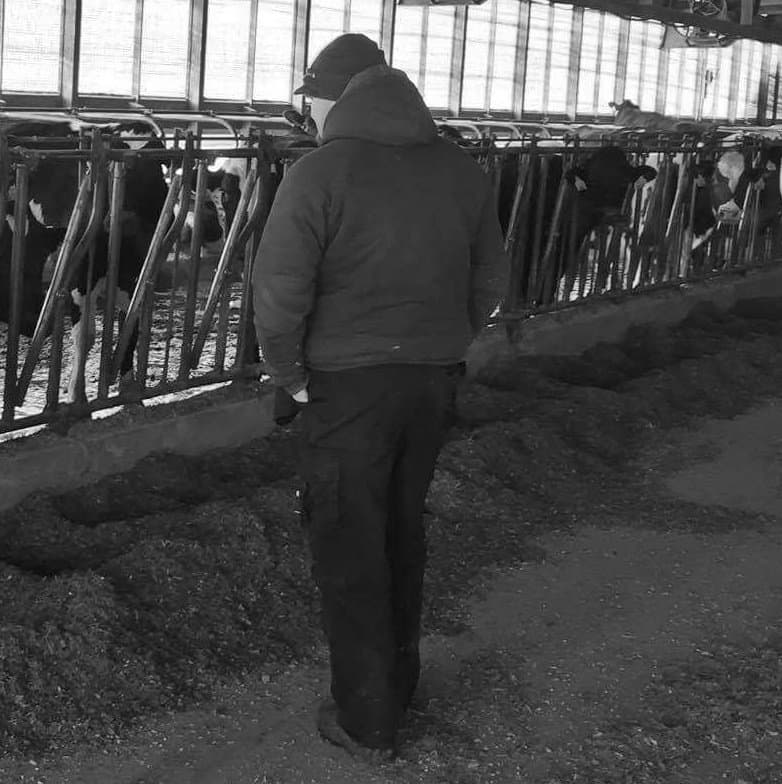 Why did your farm grow to the size where you need labor?

“We grew from 90 cows to 175 cows in the mid 90’s and up to 350 cows around 2000 and our current size of 450 cows in 2006. Before we grew, we always had two hired hands around. In fact, one is still with us for his 30th year this year. If the question is why we didn’t stay at 90 cows, the answer is economics. My dad’s back was not going to hold up continuing to milk in a tie-stall barn. So in order to build a parlor, we had to milk more cows to cash flow the addition. The move to 350 cows had a number of reasons behind it. While I was still in high school, I had decided that I would return to the farm after I attended college. Moving from 175 to 350 cows made it much easier to attract labor. We could divide the work into shifts and everybody would get enough hours to stay happy. My dad says a farm needs to perform three functions in life. Provide for the family, buy health insurance and put a little money away for retirement. Adding more cows made those three functions easier to perform. Also, one of my dad’s goals was to build a house while him and my mom were still young enough to enjoy it. Adding cows made that feasible financially. When I came home to the farm, we added another 100 cows. The infrastructure was there, the land was there. Stagnation is deadly in business. With the move to 450 cows, we effectively reached the limit of what our land base could handle.

With my dad now mostly retired (no farmer completely retires!), I’m running this operation myself. I am not married and have no kids. Hired labor is essential to the continued functioning of my farm. Some will say that I should maybe downsize to a size that I can handle myself. I’d like to see them sit down with my loan officer and present that plan and not get laughed out of the room. I’m running a business. While I do get dirty and in the trenches with my employees on a daily basis, I also have things I need to do on the business end like taking care of the books and overseeing the operation as a whole. If I don’t have time for that, the business suffers. Hard work is great, but smart work is better. Some people take pride in doing it all themselves, and I have all the respect in the world for people that choose to do it that way. I take pride in developing people and teams in order to further as many lives as I can.  My employees are my family.”

Why do you hire immigrant labor?

“Plenty of people in my position would probably answer this question with a commentary on the decline of the American work ethic. I don’t take such a pessimistic view. In most areas, we’ve done a decent job in developing adults with skills. This is a good thing! In terms of competing with trades, I’d love to pay $30/hour to all my employees but that’s just not feasible. A good friend of mine that loves working on a farm was recently offered $27/hour working in carpentry.  He was making $18/hour at the farm he worked on (not mine), with few benefits and little time off. While he loves farming, it would have been insanity to not take the offer he was given to get back into carpentry.

Why immigrants? The simple answer is that they are there and they aggressively pursue these jobs. A good percentage of them actually come from agricultural backgrounds in their own countries. As we generally become further removed from our rural roots in this country,  it’s refreshing to hire people that have been around cows and have experience. When I have a job opening, it gets filled fast, usually by somebody with an existing relationship with a current employee. I feel allowing current employees to bring on new employees has benefits in creating a cohesive team.” 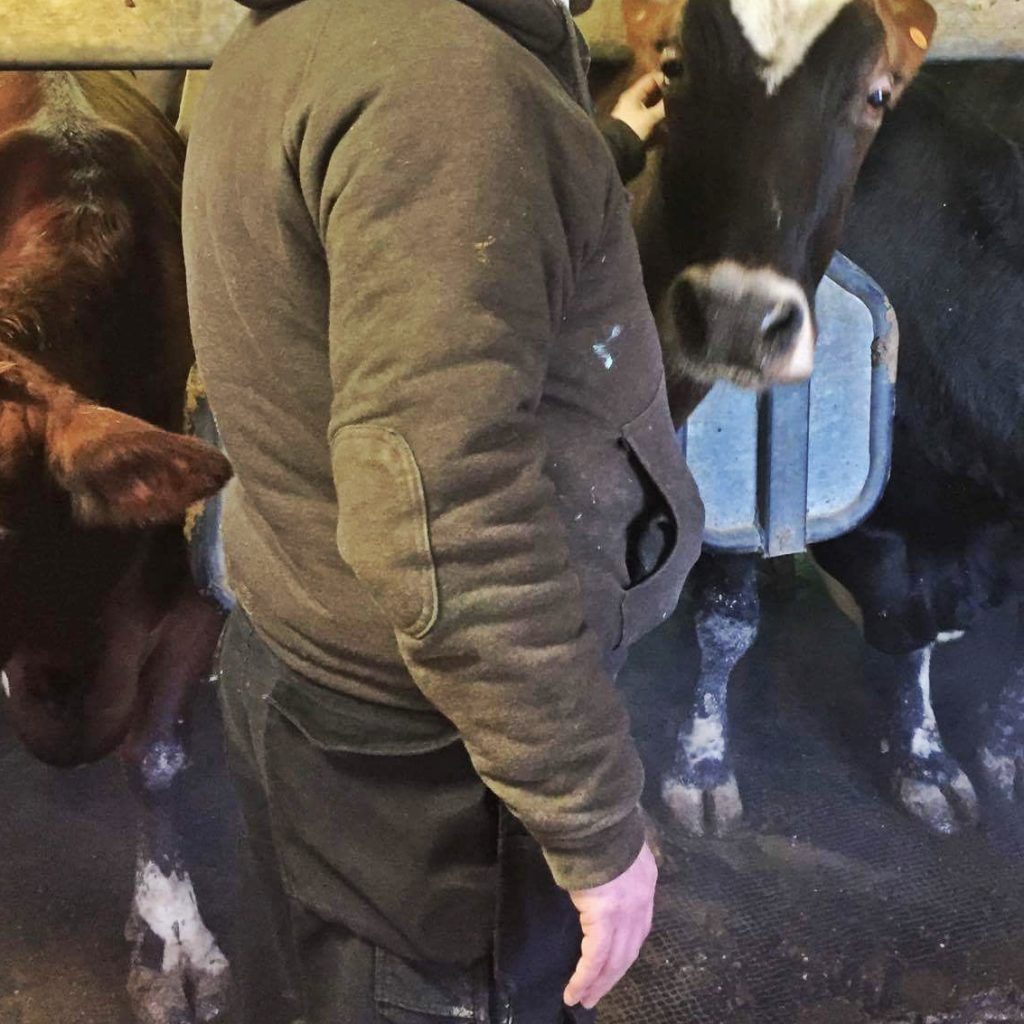 What do you pay your workers?

“We start milkers at $10/hour before bumping them up after a few months. Some are salary, some hourly, and some shift workers. What it comes out to is that year end wages end up being $30k-50k. We also provide free housing/utilities/internet for all employees. Everybody gets one full day off per week (or more if they so desire), three paid sick or personal days, and seven days or more days of paid vacation. Double pay on Christmas and New Year’s Day. I also raise some steers that I allow employees to team up and split a beef each year.”

Do you think it’s fair to hire immigrants?

“First I should make clear that I do everything above the table with regards to the government.  I have I-9’s on file for all employees.  Taxes are withheld.    Documents are all submitted to the proper government authorities.  In the past we have received two letters from Social Security inquiring on discrepancies in Social Security numbers and we complied with each of those.  So in terms of fairness toward my legal obligations, I’m certain that I’m in good standing.  Yes, I do know that many of the documents used to procure employment are fake.  Before employment starts, I ask for two forms of identification to fill out an I-9, W4 and a state W4.  A social security card is essentially a piece of cardboard.  The permanent resident card (green card) does have security measures in place.  Every single one I’ve ever seen has had the proper security measures on the card.  Holograms, watermarks, everything has always checked out.  We submit the W4’s, and never hear anything about it again. I know the peanut gallery on the internet believes I should be sitting in jail for hiring these people, but if my farm were raided tomorrow I’m confident that everything I’ve done would check out.  The fact of the matter is that the government itself doesn’t do anything to make sure all the paperwork is valid or not.

Am I being unfair to society as a whole? My employees are not on government handouts.  They are productive, tax-paying members of society.  They are a part of our community. I’m lucky enough to live in a community that has had a Latino population for long enough to see children of immigrants grow and prosper as adults.  In my little corner of the world, Latinos are a great asset to our community not only in terms of work provided, but culture too.   I know there are problems associated with illegal immigration.  I don’t want to downplay them.  There are plenty of examples that people can cite where problems are caused by undocumented immigrants.  But I believe with all my heart and my brain that a huge majority of these people are a net benefit to our society as a whole.

Judge me as you wish, but I sleep well at night.  I consider myself a human before any type of label you want to put on myself or my fellow humans.” 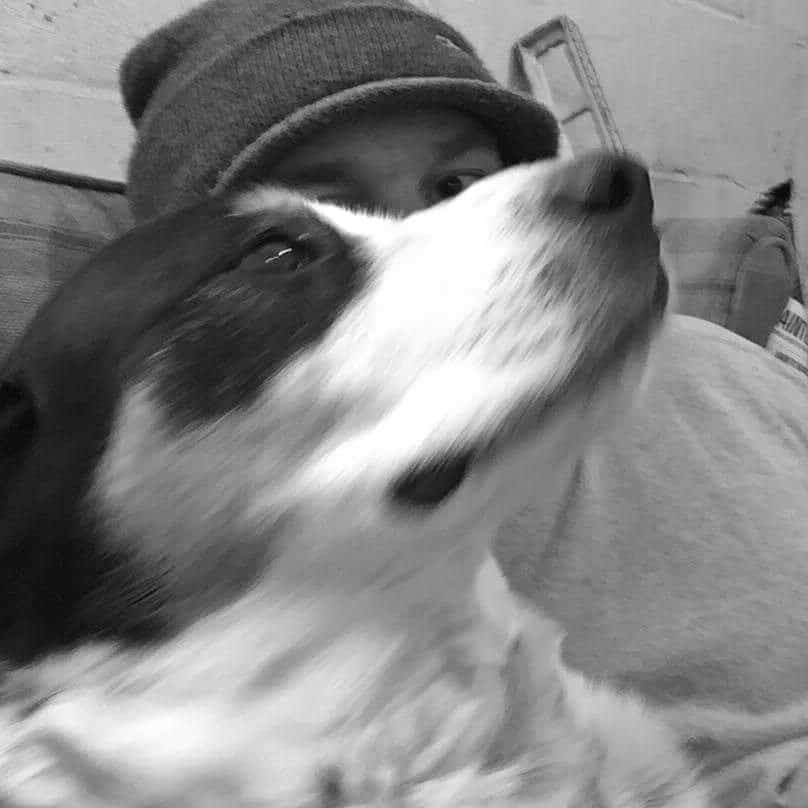 Do you help your workers get legal?

“I wish I could do more.  I’ve done interest free loans to help with attorneys.  I’ve written letters of good character to help facilitate the legal process.  But the fact is, the process is tedious, and best navigated by costly attorneys.

The best we can do now is advocacy.  There was a golden opportunity for a sensible immigration reform package back in 2007.  Unfortunately, the fringes from both sides scuttled what was a promising reform effort.  I don’t believe that anybody believes that the status quo is acceptable.  The problem is that the extreme opinions from both sides drown out any reasonable attempt at compromise.  No, we are not going to deport 12 million people.  It’s simply not going to happen.  But we are also not going to have a free-for-all policy at our border.  While I think a potential border wall is a 17th century answer to a 21st century problem, I would definitely like to see border security increased through increased deployment of border patrol agents and use of technology.  As for the people already here, we need to do something to get them out of the shadows. I’m not talking about instant citizenship.  The idea of a Z visa back in 2007 was that people already here would be given lawful permanent resident status.  That is not the same as citizenship.  They would’ve still needed to go through the process of getting citizenship after having a Z Visa for eight years.  The Y Visa would have set up a guest worker program.  The current programs are not feasible to dairy farms due to the seasonal farming aspect that the programs were designed for.  We need some kind of guest worker program that would allow somebody to stay for at least two years.  Turning over staff every eight months is not a good way to build a team that a dairy farm needs.

The solutions to this problem have been put in front of us several times, yet nothing gets done.  Who benefits from nothing happening?  I don’t.  My workers don’t.  The country doesn’t.  Politicians do, though.  They can continue to use this as a wedge issue to divide us. Stoke the passions of both sides, while each side digs in further against compromise.  I’ve essentially lost all faith in our politicians doing anything.  They benefit too much from having this issue out there to use as fodder for their ambitions of power.”

Trevor is the man behind your food. Think of him when you buy dairy products.