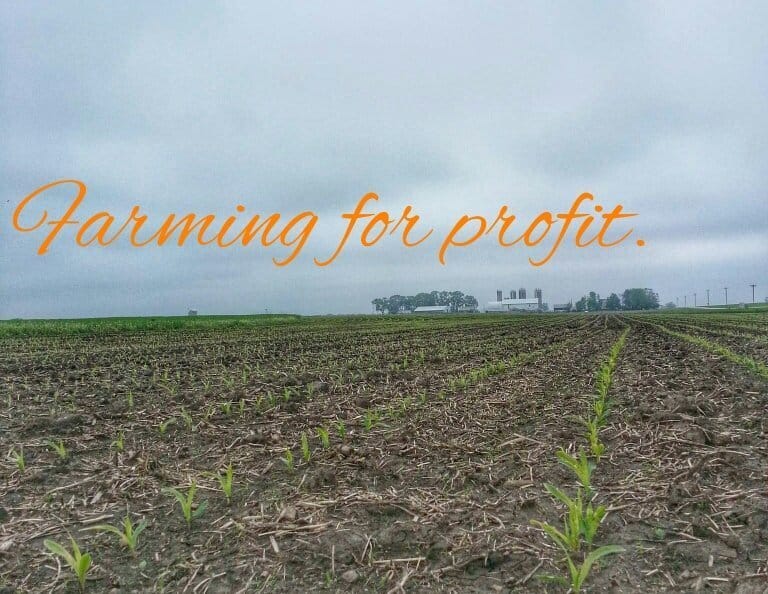 I’ve been seeing a lot of commentary online and had a few conversations lately where people have expressed their feelings about the business of farming. It seems that many people believe that farms aren’t supposed to profit. They don’t think of farms as being the businesses that they are. I think it’s time to talk about the nitty gritty business side of farming.

First the basics. Farms are businesses. Just like the hair salon, the diner or the insurance company, we can’t constantly loose money and still pay the bills. This does not change based on number of pigs, employees or acres of ground in crop. Organic or conventional, farmers need to have a profitable business to sustain.

Like any business some farms are more profitable than others. I know large farms that have had to sell the cows and quit farming because they couldn’t pay the bills. I know small farms who have had to sell the cows because they couldn’t pay the bills. I’ve seen small farmers take trips that I know I couldn’t afford, I’ve had large farmers confide in me that their families are receiving food stamps. Size of farm doesn’t seem to play into profitability in many cases.

So what does drive profitability for a farm? Most likely far too many reasons to list but the umbrella reason is smart management of the resources you have.

Suppose our farm’s land was rolling hills rather than flat as a pancake. Our current model of growing crops on our land to harvest and feed our cows probably wouldn’t be as profitable as grazing our cows on the hills. Why? Because cows handle hills a lot better than machinery. I have yet to see a cow trip and roll down a hill, but I do hear of tractors tipping over on hills and injuring or killing farmers. If our land was hilly there would be areas that we simply couldn’t grow crops on. Since our land is pretty flat, we can grow crops on just about all of our acres. Could we graze our cows on our flat land? Of course we can. However, our land is very good at growing crops, we have to consider that the amount of milk that can be made off of an acre of grazing land versus an acre of cropped land. At this time, our farm is more profitable not utilizing grazing as a production method. (Now before all you grazing lovers start commenting, I know grazing can be profitable and my explanation is over simplified but please work with me here!)

So the big question is, what kind of profits are we talking here, right? Can a farm be sustainable if it takes a cut in profits to meet what some parts of the public want to see? Again, it all depends on the farm.

On a certified Organic farm, the cost of producing the goods they sell is generally higher than the cost to produce the same goods conventionally. Meaning, an Organic dairy farmer has to pay more to buy certified Organic hay, than a traditional farmer has to pay to buy a bale of non organic hay. Often, yields from organic production are less than yields from conventional which drives up the cost of production for organic farms even more. To help offset the higher cost of bringing those organic goods to market, organic producers are paid a premium. This works well until buying habits change and suddenly people aren’t buying organic milk. In 2008 and 2009, we were in a recession. Many people couldn’t afford to buy Organic milk. Suddenly there was too much Organic milk on the market. The Organic milk companies started to sell their milk to conventional cheese plants but were selling the milk at the same price as conventional milk. This meant the farmers that were selling their milk were only receiving a fraction of the premium that they normally would. This made it difficult for organic farms to be profitable. At the same time because there was in general more milk being made than was being consumed, conventional dairy farmers were also suffering. In 2008 and 2009 the price dairy farmers were being paid for their milk was less than what it cost to produce it. For over a year, our farm was loosing money every day we got up and worked. We lost a lot of farms during that time, businesses can’t continue if they aren’t profitable.

At the end of 2013 our accountant helped us estimate our farm’s profits for the year. After all the bills and employees were paid the number was around $70,000. For tax purposes we used about $20,000 of what would have been profit and reinvested it into our farm by purchasing a new to us skid loader to replace our old worn out skid loader. That left the farm’s profit around $50,000. This means that my in-law’s who work 15+ hour days, 365 days a year made about $4.65/hr. There isn’t a ton of profit to give up when you look at it broke down like that.

Farming is a business and that shouldn’t be something that is looked at as a negative.

Previous Post: « When is the last time you dreamed big?
Next Post: I have a love/hate relationship with pants. »