I recently had someone send me a message on the DairyCarrie Facebook page. In her message she included a link to a disturbing video made by the Animals’ Angels group. This group is an Animal Rights group and the video contains some images that can be pretty disturbing. The person who sent me the message said that while she wasn’t a dairy farmer she knew this video was “missing something”  and that she would like me to explain some of the footage in this video.

First I would like you to know the difference between Animal Rights and Animal Welfare.

Animal Rights- The rights of animals, claimed on ethical grounds, to the same humane treatment and protection from exploitation and abuse that are accorded to humans.

Animal Welfare-Is the physical and psychological well-being of animals. It is measured by indicators including behavior, physiology, longevity, and reproduction.

Let’s go through this video with some truth and some knowledge, shall we? 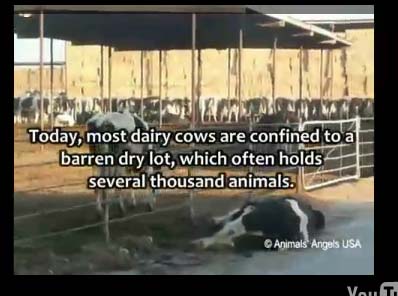 Not exactly… In areas where a warmer climate prevails cows may be found in open lots like this because they keep the animals cooler in the hot temperatures. You can see the sun shades in this photo that the cows can stand or lay under. That being said, the majority of dairy cows are housed in free stall barns. A free stall barn or a dry lot like this allows cows to lay down, eat and chew their cud whenever they want to. In fact this photo shows the cows in the background standing at the feed rail eating. As far as the cow in the front. Yes this cow is dead. I have no idea how or why she died. Without knowing the circumstances surrounding her death you can’t make an opinion about the care on this farm. Cows are living animals, sometimes they die, those are the worst days as a dairy farmer. 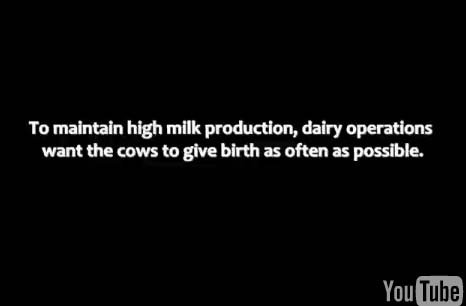 Cows only produce milk after they have a calf. The gestation period of a cow is 9 months, the same as humans. After a cow gives birth there is a waiting period before a farmer can breed the cow again. On our farm and most other farms a cow will not be bred again until she is 60-90 days out from having her calf. In the wild a cow would be bred back sooner than that if there was a bull around. 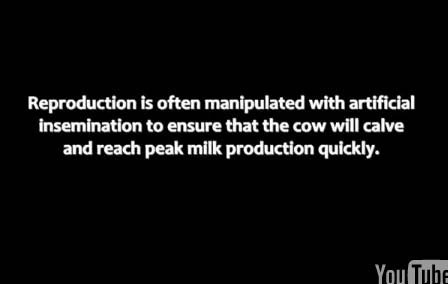 This one made me laugh out loud and shows how clueless the people who put this video together are. Artificial Insemination (AI) is the the process of using frozen semen to impregnate a cow instead of using a bull. Using AI instead of using a bull to breed cows has zero to do with a cow reaching peak production. This is like saying using a wrench will make your car’s gas mileage increase. 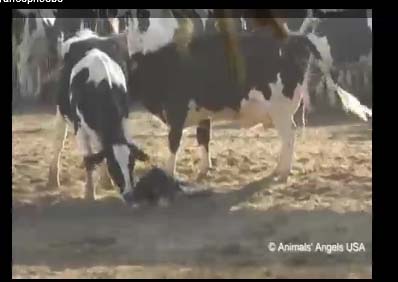 Hey! It’s a baby calf! Notice the cow licking the calf is not the one that had the calf. I can tell because the cow that just gave birth has afterbirth hanging out of her. I talked about why farmers separate the cows from their calves in a post the other day. This part of the video shows exactly what I was talking about. 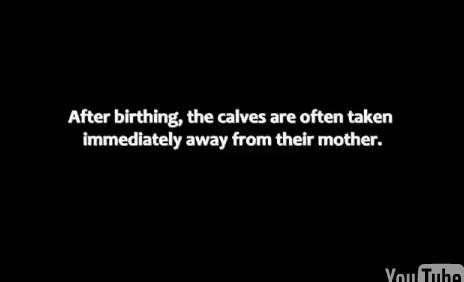 Yes, we do. For good reasons. 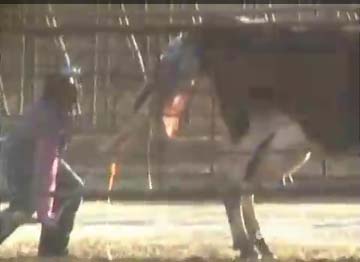 This is video of a dairy farm worker “pulling” a calf. Sometimes a calf gets stuck in the birth canal and you have to step in and help the cow give birth. Sometimes this can be done by reaching into the cow and straitening a leg or making sure the calf is positioned correctly. Sometimes the calf is just stuck. This is when we use the tool pictured in this part of the video. I don’t know the technical name of the salad tong looking thing or the vacuum thing that OB doctors use on humans but sometimes babies get stuck, human or calf and need help getting out.  By using downward leverage against the stuck calf we can help the cow deliver her calf. If this doesn’t work the next step would be a cesarean to deliver the calf surgically. 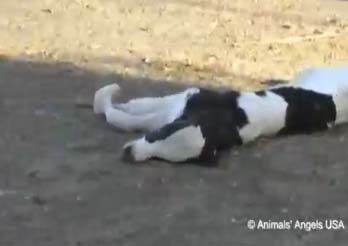 Unfortunately the calf was born dead. Because this calf was stuck it’s likely that the umbilical cord had severed or was pinched off before they got the calf out of the mother. It’s always a hard decision to know when to assist in a calving. You want to allow the cow enough time to have her calf in her own time and not rush her but you also want to help a cow who is having problems as soon as possible. It takes years of experience and sometimes just luck to know when to help or when to let her be. 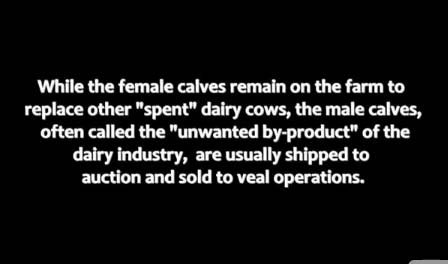 Yes, dairy farms raise heifer (girl) calves to one day join the herd.  Bull (boy) calves are sometimes also raised on the same farm or sold to beef farmers. The majority of bull calves are not sold to become veal, they are raised as steers and become beef when they reach the proper size. 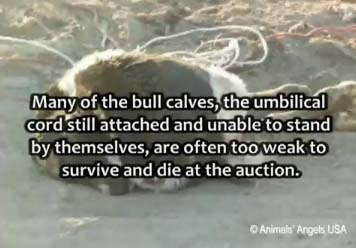 Wrong! A calf can stand within 2 hours of being born. Umbilical cords fall off after a few days- a week or more, just like a human baby. That being said we sell our bull calves at about 4 days- a week old. They are strong, they run and are drinking their milk well before we sell them. If any calves are showing signs of being weak or ill we don’t sell them until they are feeling better. So why don’t we keep the bull calves? Because we are setup to be a dairy farm not a beef farm. Keeping bull calves and raising them as steers would mean we would have less space and feed for our dairy cows and heifers. Because we want to focus on dairy instead of raising beef, we sell our bull calves to farmers who want to focus on raising beef. 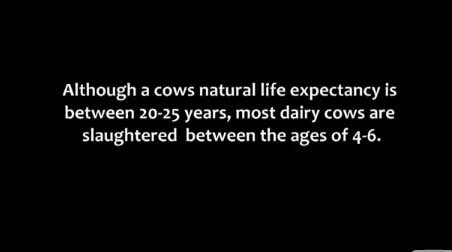 These numbers must be based on all of those wild Holstein herds out West?

So now that we have gone through the first part of the video about a cows life, let’s talk about the end of a cows life…… 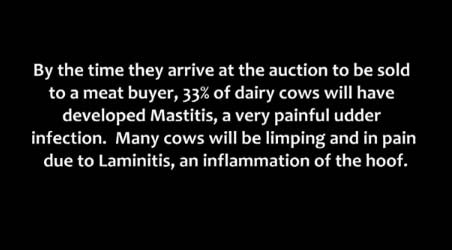 So are they saying that the trailer ride to the auction gives cows mastitis, laminitis and make them limp? The truth is that a cow with mastitis doesn’t produce high quality milk. Farmers don’t want to sell anything less than the highest quality milk so if a cow has severe mastitis or has a chronic mastitis infection that has not been cured with treatment, the farmer will sell the cow for slaughter after any antibiotics have been flushed from her system. As far as the limping and laminitis, a cow that is in pain and can’t be fixed shouldn’t be forced to suffer. 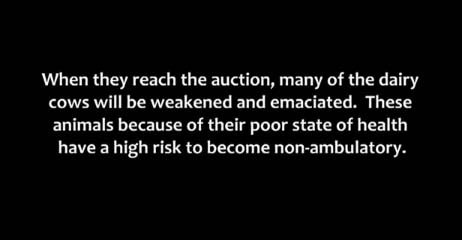 When a dairy farmer sells a cow for slaughter they get paid for her meat. A cow that is “down” or can’t get up is not allowed to enter our food supply and the farmer will not be paid for the animal. Dairy cows are very valuable animals so an animal that can’t be sold is a good amount of money lost. Sometimes a cow that walked onto the trailer can get bumped and knocked down at the auction because she already has an issue, which is why she was sold, she may have a hard time getting up or may not be able to get up. Again the cows at auction are at the end of their lives because of an injury or a different reason that makes them unsuitable as dairy cows. 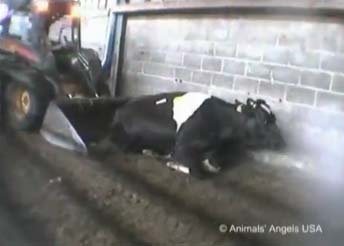 Here is a cow that can’t get up. A cow that can’t get up can not be sold. Here is a little known fact, cows have to get up with their back end first. A cow weighs 1,000-2,000lbs. If you are trying to get a cow to stand you either have to lift the back end or the whole cow. This part of the video shows a worker using a skid loader to lift the back end of the cow. He is being gentle but also trying to get her to want to get up. 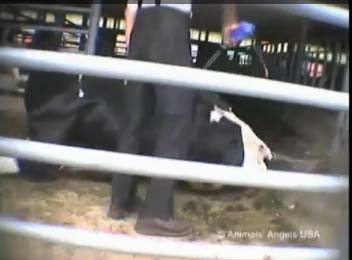 This shows a worker using a cattle prod to try and get the cow up. A cattle prod gives an electric shock similar to the shock from an electric fence but nowhere near the shock from a Tazer that are meant for human use. So why would you use something like this? Because a cow that doesn’t want to get up can’t be persuaded by asking her to pretty please get up. This isn’t something that gets used on a cow everyday, it’s a tool that is used as an almost last resort. 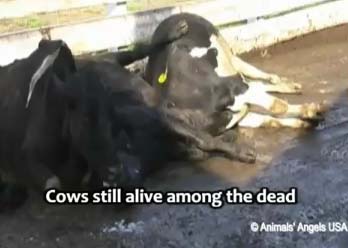 After an animal dies there will still be twitches, movement and even breaths. These are all part of the dying process. It’s not pretty no matter what species of animal we are talking about or how they died. 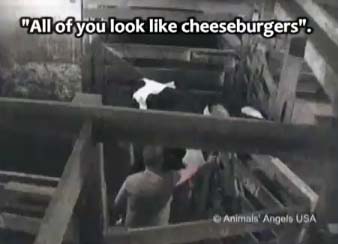 This guy may be a jerk but I don’t think the cows took offense to his statement. 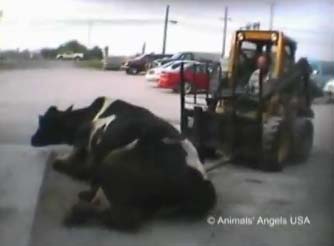 Again, trying to lift a very heavy cow sometimes means using equipment. When you watch this you can see that the driver is being very careful to get the pallet forks (these are flat pieces of metal, not spears) under the cow to try and lift her. 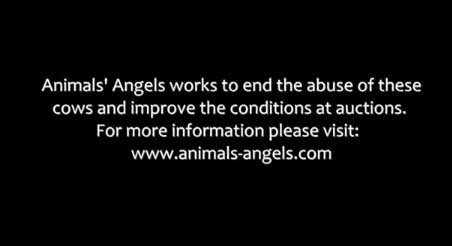 Animals’ Angels Inc. is a 501 (c)(3) non profit organization incorporated in Maryland with a team of investigators working nationwide. Our mission is to improve conditions for farm animals. We work primarily in the field, inspecting livestock trucks on highways, visiting markets, collecting stations and slaughter plants.

Our documented reports and video footage are provided to news media as a public service. We present our investigation results to auction and slaughter plant management, to encourage positive change in the way farm animals are handled during transportation, at auction, and at slaughter. We share documentation of cruelty with law enforcement to ensure that violators of animal protection laws are being held responsible for their actions.

So you be the judge, are they all about Animal Welfare? Making sure the animals are taken care of well as animals. Or are they about Animal Rights and working towards ending all animal agriculture?

I hope I was able to explain some aspects of this video. While the images are not pretty and are hard to look at a little information about what is going on sure sheds a different light on what you are seeing. If you have any questions or comments please leave them below and I will try and answer them. Remember, if this is your first time commenting on my blog your comment will have to be approved before it is posted.

Previous Post: « A new baby, now what?
Next Post: From cow to tank to cheesemaker to delicious. »