This Rhubarb Custard Cake recipe is magic. Not only is it as simple as can be, you’ll be amazed at how it turns out!

For many years Hubs refused to join facebook. After many discussions he finally caved in and joined. But, before that I was friend requested by the people he went to school with and because he wasn’t on facebook, I was tagged in photos like this one…

This type of activity was one of my discussion points in finally convincing Hubs to get his own dang page. I am still trying to train him to actually check his notifications.

A rhubarb recipe from a friend!

Anyways, this post is called Rhubarb Upside Down Custard Cake, so you are probably wondering what this has to do with Hubs and Facebook. Well you see, one of his high school friends that I have become Facebook friends with is Noah. Noah is a pretty awesome dude, he can build an addition on your house, he makes wine and he can bake a cake. Hub’s must have missed the wine making and cake baking class that Noah took in high school.

Noah posted this cake several years ago on Facebook and I made it and it was amazing. Then the following year I wanted to make it again and couldn’t find the recipe so I had to pester Noah for it again. This same scenario repeated at least once more. Finally I made it and took photos and I am posting it here for you all to enjoy but mostly so I don’t have to ask Noah for the recipe again. I am also going to pin it on Pinterest, because I can!

This cake is the perfect way to use up the copious amounts of rhubarb that a person might have lying around. I also like it because it’s a low sugar rhubarb recipe. Most rhubarb recipes have you dumping all kinds of sugar on it. This cake only has the sugar that a normal cake has and that doesn’t mean the rhubarb is so tart you can’t stand it. This cake is super eatable without gobs of sugar. It’s delicious, unique, super simple and easy to tweak to make it your own. If you are looking for a different style rhubarb custard cake, check out #InternSarah’s Rhubarb Custard Cake or try my Rumchata Rhubarb Crisp. 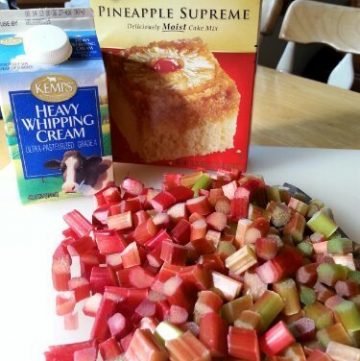 This Rhubarb Custard Cake recipe is magic. Not only as simple as can be, you'll be amazed at how it turns out with the cream and rhubarb on the bottom.
Print Recipe Pin Recipe
Prep Time 15 mins
Cook Time 25 mins
Course Dessert
Servings 16

Tried this recipe?Let us know how it was!