This cucumber salad is what my grandma used to make. I think every grandma in the Midwest has her own take on this classic.

Last night Hubs and I finally went out for Valentine’s Day. Yes, it is the middle of July. Our original plans in February were thwarted by the cows, as usual and this was the first time since then where the stars aligned and we had a milker scheduled and a babysitter available.

We could have had a romantic meal for two, but let’s be honest after almost 8 years of marriage, the better part of 13 years of being together and working together on the farm for the last 3 years, we like it best when we to talk to other people to. Lucky for us, our good friends who are also dairy people were able to snag a sitter and join us.

What does a Valentine’s date in July that you invite friends to have to do with cucumber salad? The answer is simple, my veggie garden didn’t get planted until the  end of June and I have no cucumbers yet but our friends were more on veggie ball this year and that means I got a sack full of fresh picked cucumbers last night.

So today I made this cucumber salad. It’s a classic Midwestern recipe, the kind that has been around forever, contains mayo and is most often found on picnic tables at family reunions where everyone has a last name that means something in German. Have no fear, with the addition of milk, it doesn’t taste mayo-y. It’s simple, it’s tasty and you probably have the ingredients on hand to make it.

Check out my potato salad recipe HERE if you’re looking for another great summer recipe. 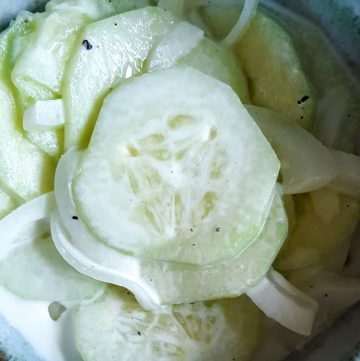 That’s it. Super simple! This would also be great with some garlic mixed in, in fact… I think I’ll try that next time. Enjoy!
Tried this recipe?Let us know how it was!

Previous Post: « The Hungry Truth. 3B Brae’s Brown Bags.
Next Post: 5 Things I Have Learned in 5 Years of Blogging. »