Seven percent of American adults believe that brown cows produce chocolate, red cows produce strawberry, and white and black cows produce plain milk (More on that here). While this is not true, there are different breeds of cows that all have different characteristics. Holstein, Brown Swiss, Guernsey, Jersey, Milking Shorthorn, Ayrshire, and Red and White Holstein are the seven common breeds in the United States.

Before we look into the differences and characteristics of the breeds, let’s define a few key terms for discussing milk..

Butterfat percentage: The amount of fat content in the milk related to the average weight of the milk. Some cows produce more fat in their milk than others, and farmers are paid a premium for higher fat percentages. 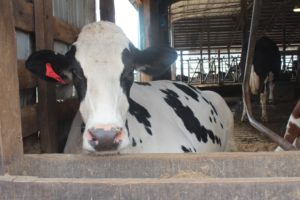 Holstein, the most common breed

The most common breed is the Holstein. Holsteins are large black and white cows that produce the most milk of all the dairy breeds. Originally from the Netherlands, the first cow was brought to America in 1621. One interesting thing about Holsteins is that no two animals have the same black and white markings. Some can be white with black spots and others black with white spots. During my showing days, I preferred black with white spots because they were easier to clean ;). Holsteins weigh about 1,500 pounds and can stand to be about 5 ft tall. 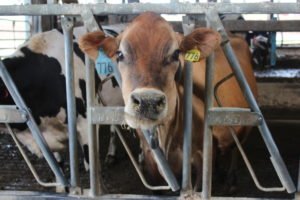 Jerseys are the second most popular breed and one of the smallest breeds weighing only 900 lbs. They are known for their fawn color coat, beautiful eyes, and long eyelashes. However do not let the batting eyelashes fool you, in my experience, Jerseys can have a bit of an attitude. Jerseys are named after the island they originated from, Jersey in the British Isles. They were brought to the United States around 1850. Milk from Jersey cows tend to have higher butterfat and protein percentages, which makes their milk perfect for cheese and ice cream making. 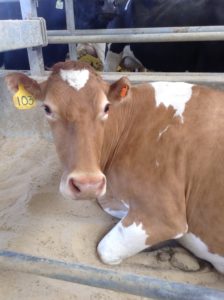 Originally from the Isle of Guernsey in the British channel, Guernseys, also known as the “Golden Guernsey” or “Royal Breed”, is recognized by the golden color of its milk due to high levels of beta carotene, a source of vitamin A. Their milk also has high levels of butterfat and protein making it perfect for making a distinct golden ice cream product. They weigh about 1,200 lbs.,  making them a middle sized breed. Guernseys are fawn and white colored and known to be docile in nature. 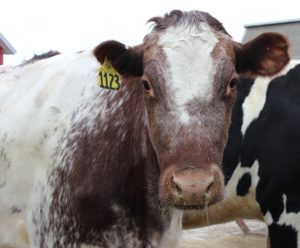 Milking shorthorns are known as the most versatile breed because originally they could be used for both dairy and beef production when they came from England in 1783. Through breeding for certain characteristics, now there are two different breeds, one for dairy production and one for beef production. The average full grown Milking Shorthorn is about 1,400 lbs and with coloring ranging from roan to red and white. They are known for a high butterfat to protein ratio. 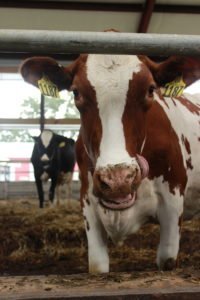 Ayrshire is a middle sized breed weighing about 1,200 with colors ranging from a light red and white to a darker red and white. They were brought to the United States from the county of Ayr in Scotland in 1822. Nicknamed  “the aristocrat breed” for their beauty, size, and vigor, Ayrshires are extremely adaptable to the climate and can be found all over the world including South Africa. 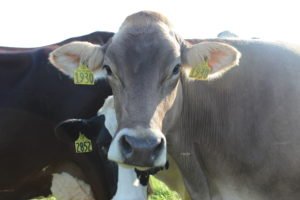 Brown Swiss, the oldest of the breeds

Believed to be the oldest breed of cattle with records dating back to 400 B.C.E, Brown Swiss are a docile large breed weighing about 1,500 lbs. Their color can range from a silver to a dark brown and they have large ears. Originally from the Swiss Alps, the high protein to fat ratio of their milk make it perfect for cheese making. 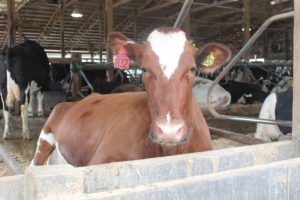 Red and White, the newest breed

I hope you have learned something about the dairy breeds, or at least picked up that people like to name cattle from where they come from. Next time you drink glass of milk, think of the beautiful girls who worked to produce it for you.