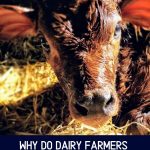 What happens to dairy cow’s calves?

After this post, I thought I should write a post that explains what happens to dairy cow’s calves after birth. Taking calves away from cows is a common practice on dairy farms, and the reasons for separating cows and calves is based on a mixture of science, experience and what works for individual farms.

When I had Silas, my oldest son, I only knew about lactation when it came to cows and I didn’t really understand what parts of that knowledge applied to humans as well. Right after he was born I was really concerned about the amount of colostrum he was getting. I found it really odd that the lactation consultant, who was awesome, wasn’t super concerned like I was. It prompted me to do more research on the differences between humans and calves when it comes to lactation and colostrum. Yes, I am that big of a nerd. Plus I needed something to keep myself awake while Silas stayed attached to me for hours at a time in the middle of the night. A girl can only play so much Candy Crush, right?

This is what I found out. Unlike human babies who receive the majority of the antibodies that will help them build their immune system while still in the womb, calves do not. There is plenty of research that shows human babies getting colostrum can have a positive affect on their immune system, but in calves it is absolutely vital to their future that they get colostrum. Unlike humans, calves rely on what is called passive transfer from colostrum to build the majority of their immune system. At birth a calf has the ability to take those antibodies that come in colostrum in through their intestines, but that can only happen in the first 48 hours of life. Once the calf is born the window starts closing, so the sooner they get colostrum the better.

In order to do that we milk the cow and collect her milk into a special pail that has been sanitized. Then we test the colostrum to make sure it has enough antibodies. If the cow doesn’t have the best colostrum we throw it away. Then the calf gets either frozen colostrum that met our standards from a cow that milked more than her calf could drink or a powdered mix that is made out of dried colostrum from donor cows instead.

If we left the cow and the calf together and had the calf nurse from the cow, there wouldn’t be a way for us to know for sure how much colostrum the calf drank or how high of quality the colostrum was that the calf was drinking.

It’s safer for the calf.

After a cow has a calf, we let the cow lick off the calf while we get her some electrolytes (I call it Cow Gatorade) to drink to help her recover from giving birth. We also get oral vaccinations ready for the calf that we give before the calf gets it’s colostrum.

Letting the cow lick off the calf not only helps the calf not be a big ball of goo, it also helps stimulate the calf to get up. But it is also risky for a few reasons. After thousands of years of selectively breeding for dairy cows that don’t try to kill humans who are trying to care for cows and calves, dairy cows generally aren’t very maternal.

Sometimes the cow has a calf, abandons it and doesn’t lick it off. When that happens we step in and use towels to dry the calf off. Sometimes cows will step on, stomp, lay on or crush their calf, which is one more reason we remove them. As a farmer it is so hard to see a new little calf’s life cut short by it’s own mother. It doesn’t happen often but when it does I feel so much guilt for not being able to save the calf.

Our calves are healthier when they don’t live with the cows.

New moms protect their babies by asking people to not kiss their babies and making sure everyone washes their hands before touching the baby. Cows do none of that. Cows aren’t an animal that will go to one area of the barn or pasture to poop. Instead they let it rip anywhere. That means newborn calves are exposed to potentially bacteria right from the start. We do a lot of work to make sure the area our cows deliver in is clean, but there isn’t a way for areas to be and remain sterile if a cow is living in it.

When a kid goes to school for the first time, often times they get sick a lot because they are being exposed to all kinds of different viruses and bacteria. I can say from personal experience, the first year of Silas going to 3K has had a negative effect on the health of everyone in our family. We have all been sick with multiple colds and a few tummy bugs.

Removing the calf from the maternity area soon after birth lessens the calf’s exposure to bacteria. On our farm and many others, after a calf is born it spends the next 8ish weeks living in a calf hutch. You can learn more about them HERE. These first weeks of life is when their immune system is growing stronger. Having them in their own pen allows us to monitor them for any signs of illness. It allows us to make sure they are eating and growing well.

Like kids, illness spreads quickly in baby calves. The big difference is that while a kid at school may catch a cold from another kid and be sick for a week, thanks to vaccinations it’s rare that a life threatening illness spreads through a classroom. That is not the case with calves. When calves get sick, generally we are dealing with illnesses that are much more serious than the common cold.

Making sure each calf gets good colostrum right away, that they aren’t hurt or killed by cows and limiting their exposure to bacteria and viruses is what we do to make sure our calves get the best start possible. Want to know more about what happens to dairy cow’s calves? Check out this post about what happens to male calves on dairy farms or this post that explains how and why we dehorn calves.